Fall is the perfect time to integrate science and language skills into one lesson. Build on background knowledge with this pumpkin compare and contrast lesson. All you need is an orange pumpkin, a white pumpkin…. no prep!! 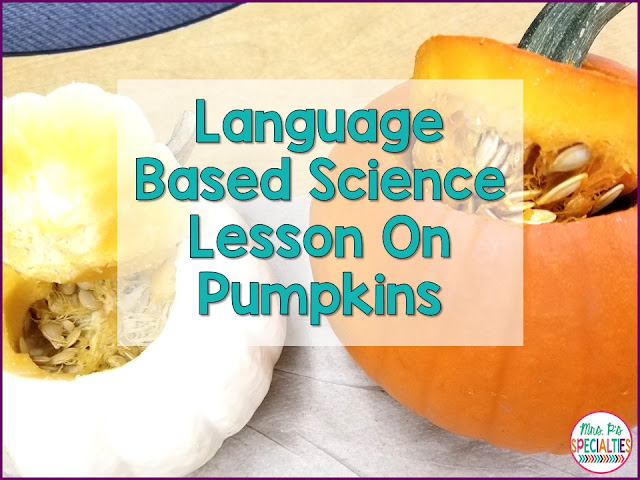 To begin, we talked about how a white pumpkin and an orange pumpkin are similar and different. Some of my students needed visuals to choose from. We used visuals for colors, bumpy, smooth, stem, pumpkin, etc. With the visuals, students were able to say that the pumpkins were different colors, but both had stems.

Next, we worked on making predictions about what we would find inside. Everyone in my class had carved a pumpkin before so we talked about that first to activate background knowledge. Then, we began making our predictions. We were split… half of the group thought the white pumpkin would look just like the orange pumpkin inside while the other half of the group thought they would look different inside. To reduce wait time, we made the predictions while I was cutting through the pumpkins. Leave the tops on until everyone has made a prediction!

To build the suspense and language opportunities, we took off the orange pumpkin top first. We talked about what saw. Here are some examples of our observations:

“There were a lot of seeds attached to the top.”
“The pulp feels slimy.”
“The orange inside the pumpkin is different than the orange skin on the outside of the pumpkin.” 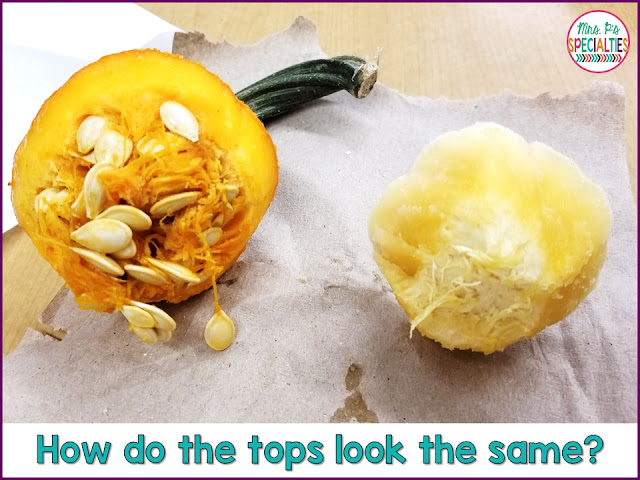 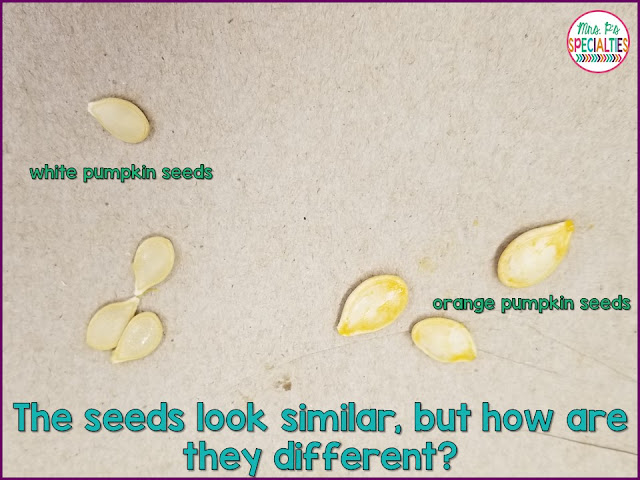 So much language!! Don’t let it end there, though. Build in literacy by having students draw about the differences in their journal or make a chart listing how the pumpkins were the same and different. Another option is to complete a Venn diagram to compare and contrast the pumpkins. So many skills can be targeted with this NO PREP science lesson.
Keep the learning going! Click on the links below to read about similar lessons.
Pumpkin Science
Easy Fall Science Activities
Halloween In The Special Education Classroom
Don’t forget to pin this post! Previous Post: « 10 Reasons To Use Adapted Interactive Books In Special Education Classrooms
Next Post: Create & Use An Interactive Poster For Science Lessons »

Today and tomorrow you can get ANYTHING in my stor

Writing doesn't have to be a student using a penci

Do you have staff working in your classroom that s