Research has been clear… combing movement and academics leads to better learning. The penguin unit lends itself nicely to integrating sensory and movement. Here are some ideas to get you started. 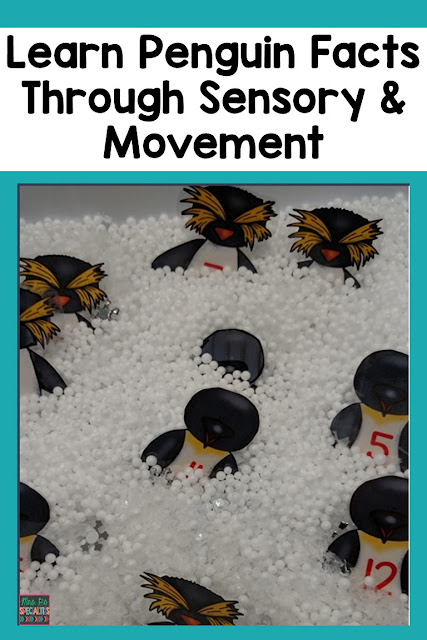 In this lesson, we used this FREE Penguin Facts & Sensory Activity set.
First, you need to make a winter sensory bin. This is what ours looked like:
Doesn’t it look like a fun winter wonderland?! 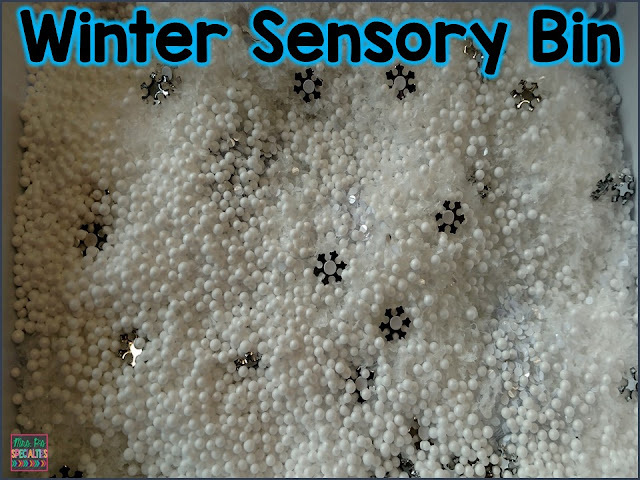 Here is what I put into my bin. The snowflakes were on clearance at Target for 25 cents a bag and the rest of the supplies were purchased at the dollar store. 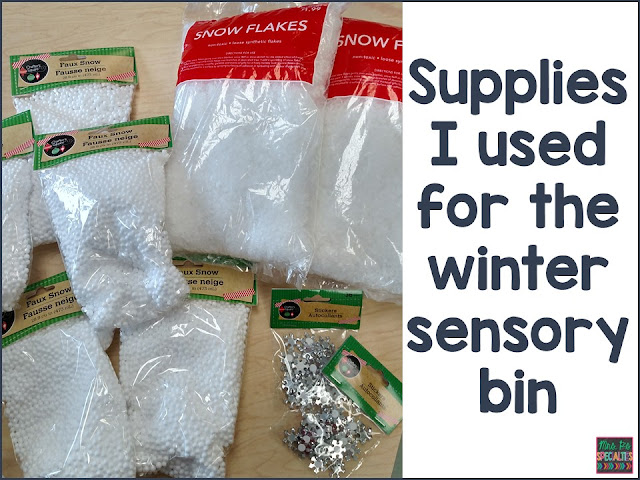 The bonus item in the sensory bin…. 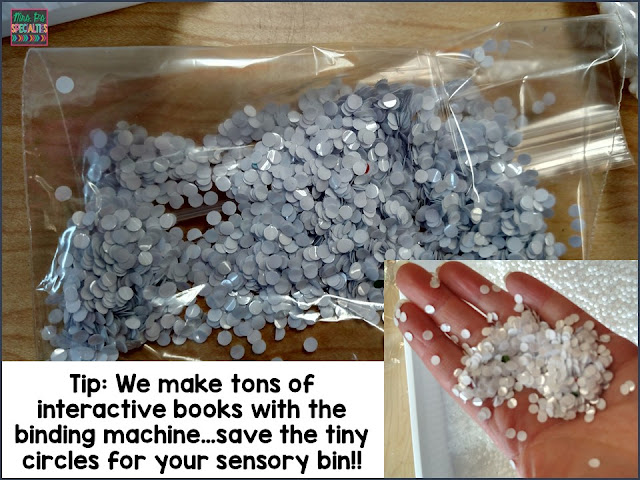 Now that your sensory bin is ready, you are ready to start the lesson. First, we hid small numbered penguins in the sensory bin. Then we put the penguins with facts face down on the table next to the bin. 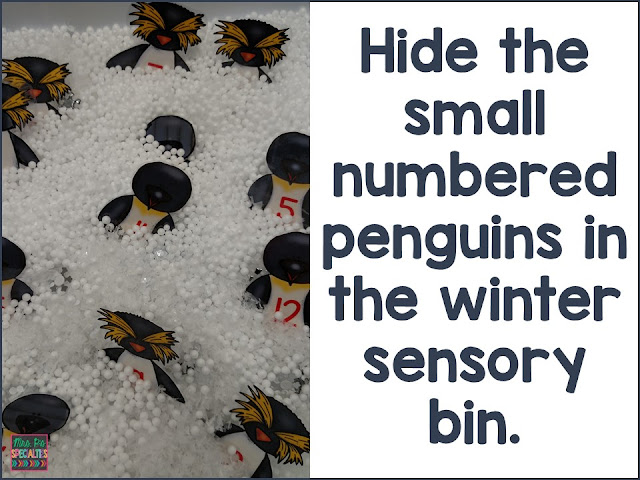 Students took turns coming up and finding a penguin in the sensory bin. Once the penguin was found, the student had to identify the number on the penguin and then find the face down penguin (with the facts written on them) with the matching number. 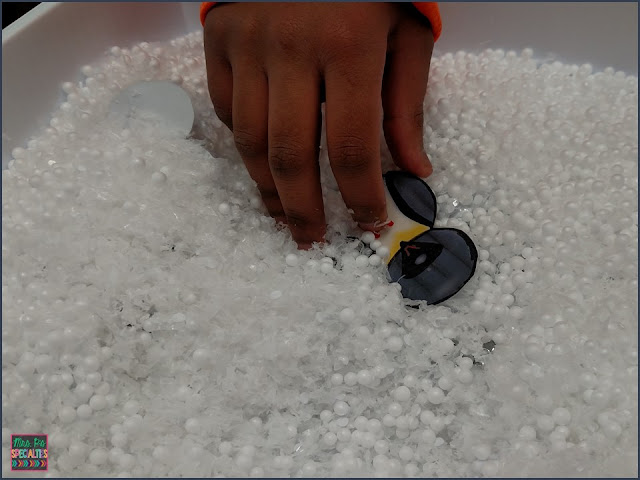 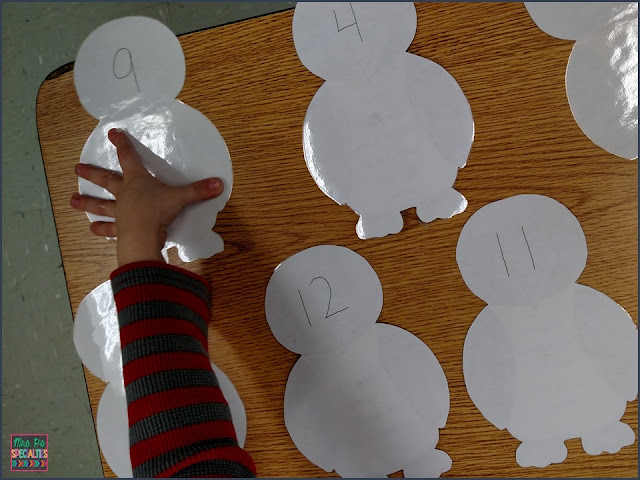 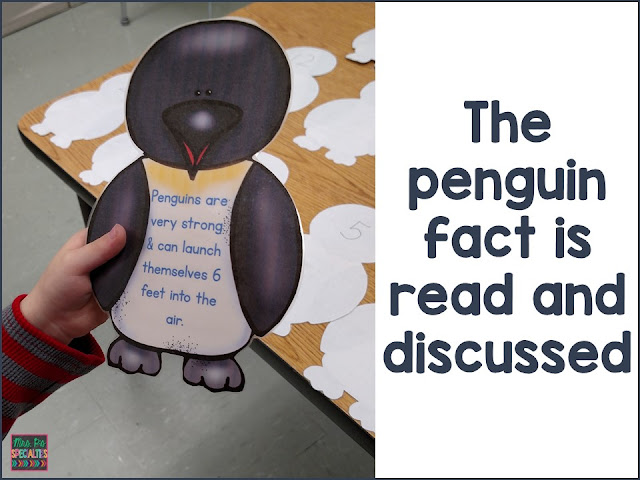 We read and discussed all of the penguin facts and then displayed them on the board. After talking about them we added in movement. Students got to pretend they were penguins and had to slide across the ice (AKA white sheet or table cloth.) Once they were across the ice they had to jump 6 feet (or as high as they could!) and then dive to get a pretend fish. 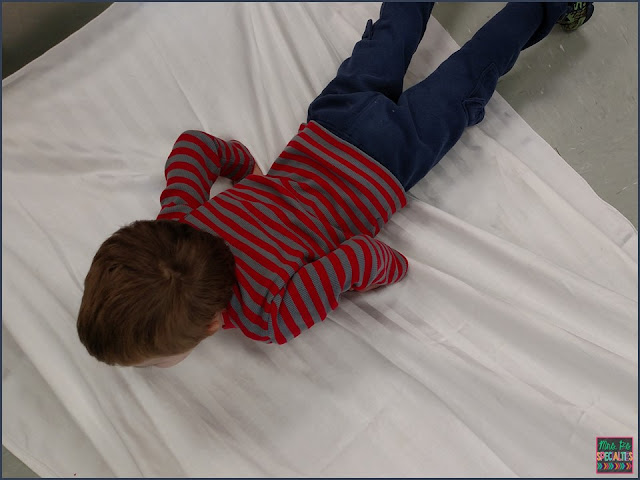 Once everyone had taken a turn, we reviewed the penguin facts with a ball game. I took a weighted ball and got poised to throw it to a student. As I threw the ball, I asked a review question. The student had to catch the weighted ball and then say the answer as s/he throws the ball back. My kiddos LOVE it and proved that they learned a lots of facts about the penguin. Win!!
Don’t forget to head over to my TPT store to download your FREE copy of the Penguin Facts and Sensory Activity set that I used for this lesson.
Click here to pin this blog post to refer back to or share with others.

⭐SPED TIP⭐Create task boxes that can easily be

Interactive books are one of the easiest ways to t

Don't miss out to save on everything you need to t

Save your back and the floors!! Put a piece of fel

Grab this and everything else in my store for 25%

There is something about a easy to use data sheet

This is the simplest way to improve transitions th